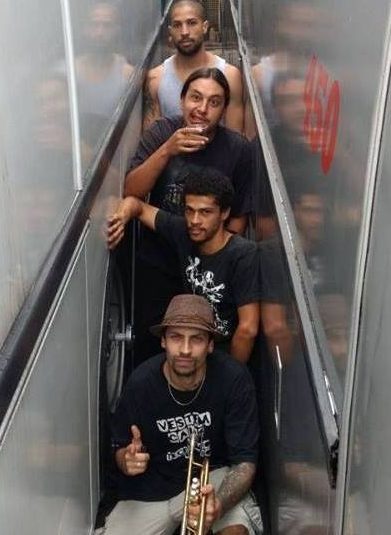 Since 2007 on the road, Asfixia Social has performed hundreds of shows in Brazil and abroad, having released 2 CDs and 2 DVDs – live in São Paulo and live in Cuba, becoming one of the most active independent bands of Brazil.

From the energetic shows to the intense activism, the band caught the attention of public and media to the originality of their sound and mix between rap, punk, brazilian music, ska, dub, hardcore, jazz, reggae, funk, metal and lyrics that portray the daily life of the group in the outskirts of São Paulo – Brazil.

In the new singles “Get Ready”, “Sistema de Som(a)” , “Quem Sobra“, “Nóiz tem à Vós” and “Do começo ao fim”, Asfixia Social shows the strength of its ideas and all musicality that will be present on their third album “Sistema de Soma: A quebrada constrói”, already in mixing process and released in april 2019.

This website uses cookies to improve your experience while you navigate through the website. Out of these, the cookies that are categorized as necessary are stored on your browser as they are essential for the working of basic functionalities of the website. We also use third-party cookies that help us analyze and understand how you use this website. These cookies will be stored in your browser only with your consent. You also have the option to opt-out of these cookies. But opting out of some of these cookies may affect your browsing experience.
Necessary Altijd ingeschakeld
Necessary cookies are absolutely essential for the website to function properly. These cookies ensure basic functionalities and security features of the website, anonymously.
Functional
Functional cookies help to perform certain functionalities like sharing the content of the website on social media platforms, collect feedbacks, and other third-party features.
Performance
Performance cookies are used to understand and analyze the key performance indexes of the website which helps in delivering a better user experience for the visitors.
Analytics
Analytical cookies are used to understand how visitors interact with the website. These cookies help provide information on metrics the number of visitors, bounce rate, traffic source, etc.
Advertisement
Advertisement cookies are used to provide visitors with relevant ads and marketing campaigns. These cookies track visitors across websites and collect information to provide customized ads.
Others
Other uncategorized cookies are those that are being analyzed and have not been classified into a category as yet.
OPSLAAN & ACCEPTEREN
Scroll naar boven